THE RECYCABLES - 90 second segment for season 45

“Broadcast in 2015 internationally in over 200 countries “The Recyclables” for SESAME STREET was an amazing process.” says Producer Helen Morrison. “It’s a household name and being part of it was brilliant.”

The 90-second film called “The Recyclables”, is all about recycling and how to re-use common household items, like buttons, toilet rolls and straws.

It was filmed in the Brisbane bayside suburb of Sandgate, featuring local 4-year-olds at the Sandgate Kindergarten, also starring Indigenous talent Dean Brady.

Director Dean Gibson knew 10-year-old Brady was the talent for the job.

“I had a concept about a band singing to young kids about recycling and when I came across Dean Brady, I knew he’d be a great choice,” he says.

“His experience with being a finalist on Australia’s Got Talent, and his Indigenous background made him a perfect fit.”

The segment has been months in the making, from workshopping the concept, to having a local musician write the catchy tune, recording with Dean Brady in his hometown of Cairns, and arranging some of Brisbane’s best crew to take part in the shoot. 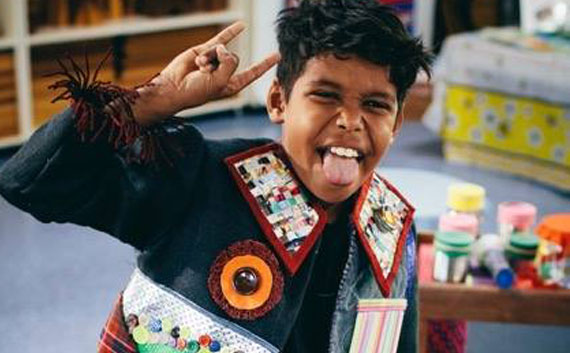